Bruce Wayne/Batman is a character from the Lego Movie (Originally from DC comics) and a Master Builder. 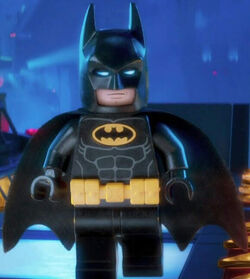 Batman was teleported to Vorton by X-PO along with his friends and he met other heroes. He was teleported into Foundation Prime, with serveral other heroes, to face Lord Vortech. They fallied and were cornered by villains. They were saved by X-PO, when he opened a portal, which brought them back to Vorton.

*Batrang - Batman commonly uses Batrangs. These weapons are basicaly boomerangs in the shape of Batman's simbol. 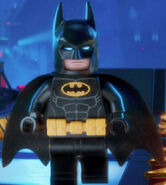 Add a photo to this gallery
Retrieved from "https://legocrossover.fandom.com/wiki/Batman_(Lego_Cinematic_Universe)?oldid=679"
Community content is available under CC-BY-SA unless otherwise noted.