After witnessing the senseless murder of his parents, Bruce Wayne (Voiced by Troy Baker) dedicated his life to fighting crime. By day, he’s billionaire businessman Bruce Wayne, but by night, he’s Batman, striking fear into the hearts of Gotham City criminals. He also drives the absolutely coolest car on the planet and fights with the most amazing gadgets. Batman works both alone and alongside his fellow Justice League members to rid the world of evil and to prove to all that you don’t need superpowers to be a Super Hero. Regardless of which creepy Super-Villain he is battling, Batman has committed himself to bringing justice to Gotham City. 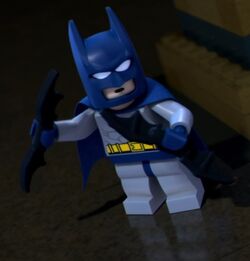 None, but has a ton of Batsuits and armors

Batman and the Justice League were teleported to Vorton as reinforcements after the first battle with Lord Vortech in Foundation Prime. They helped the rest of the Hero Alliance in their missions. He was present during the second battle of Foundation Prime, where he fought Pythor, knocking him aside and also managed to defeat Darth Maul, using one of his grapple guns to trap him to a wall, before being knocked down by the power of Thanos' Infinity Gauntlet. Batman witnessed Lloyd regain his Golden Powers and defeating Thanos. When Lord Vortech defeated Lloyd, Batman and the other heroes returned to Vorton. Sometime later, Batman was ambushed by Boba Fett, but he managed to defeat him, by throwing a Batrang at Boba's rocket, knocking him down. Batman took his blaster and showed his dislike of guns, by throwing it away, before taking back the Batrang. He tried to capture Boba, but he was called back to Foundation Prime. 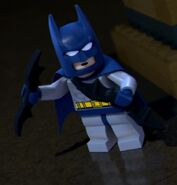 In the Lego Crossover Videogame

Add a photo to this gallery
Retrieved from "https://legocrossover.fandom.com/wiki/Batman_(Lego_DC_Heroes)?oldid=1048"
Community content is available under CC-BY-SA unless otherwise noted.