Cragger (Voiced by David Attar) is a member of the Hero Alliance and is a former villain turned protaganotist in Legends of Chima.

Cragger was teleported to Vorton, along with his friends, where he met the Ninja from Ninjago, the Nexo Knights, the Master Builders from The Lego Movie and the Toa from Bionicle. He was soon teleported to Foundation Prime to stop Lord Vortech, along with serveral other heroes. He was soon cornered by the villains. Cragger brefly fought Pythor but was eventualy defeated. He was saved when X-PO opened a portal back to Vorton. 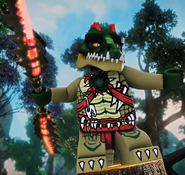 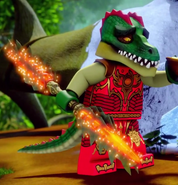 Cragger in his Fire Chi attire
Add a photo to this gallery
Retrieved from "https://legocrossover.fandom.com/wiki/Cragger?oldid=1708"
Community content is available under CC-BY-SA unless otherwise noted.