Start a Wiki
Once the Jedi hero Anakin Skywalker, Darth Vader (Voiced by Matt Sloan) now serves the Emperor as a Dark Lord of the Sith and an enemy to all who would rebel against the Empire’s tyrannical control. He is highly skilled with a lightsaber and strong with the dark side of the Force, even while sealed within the black mask and armor that keep his scarred body alive. When he brings his captured son Luke Skywalker before the Emperor on board the second Death Star, Vader will have to decide where his loyalty truly lies. 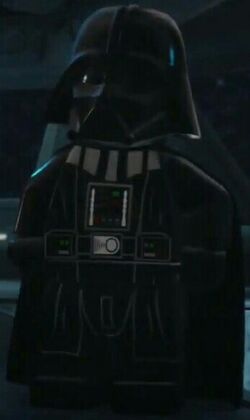 42 BBY (Before Battle of Yavin)

Unknown (Grown up on Tatooine)

Blue (Later yellow/orange as a Sith)

Once a powerful Jedi, Anakin Skywalker joined the Dark Side to save his wife Padme from death and in doing this destroyed the Jedi Order but was left injured after a fight with Obi-Wan Kenobi, his old master. He was then found by Palpatine, his master and given cybernetic limbs and a life sustaining suit. He would be weaker and less powerful than without the suit but he would still be very strong in the Force, especially the Dark Side. Now his wife was dead as far as he knew his children were also dead so he had nothing left now except to eradicate what was left of the Jedi and find and kill Obi-Wan Kenobi. For many years he did this. He always contemplated what his life would have been like had he not betrayed his friends. He lived a life of sin, regret, betrayal, destruction and was completely lost. His heart grew black like his suit and his loud breathing and deep voice shot fear into everyone in his presence. When he found out about his son, Luke Skywalker he attempted to turn him to the Dark Side. Soon his son would seek to redeem him but Vader believed the lie that it was too late for him. His master wanted Luke to replace his father and when Luke and Vader fought Luke won but before killing him he hesitated and the Emperor tried to kill him. Vader then remembered the mistakes of his past and in that moment he killed Palpatine and saved his son. Redeeming himself and accepting again the light. Soon he died from his injuries and he was able to ascend to the sphere of Jedi in heaven and would be able to reappear as a Force Ghost to guide future Jedi. Even though he died a redeemed man he would still be remembered as a villain and skurge of the galaxy. His name would still strike fear and hate in people’s hearts but others would be inspired by his evil deeds and seek to follow his example. His legacy would be remembered by all.

Darth Vader first appeared when the Elemental Masters and serveral allies come tough a portal, serveral villains also sneaked in including Darth Vader. He was present when Mallock the Malgin come to help them.

The words on the cup translate to "Galaxy's Best Emperor".

Vader with a group of Stormtroopers.

Vader and Graballa the Hutt.