"Fool! You are mortal! You can't handle the power of the MULTIVERSE!" 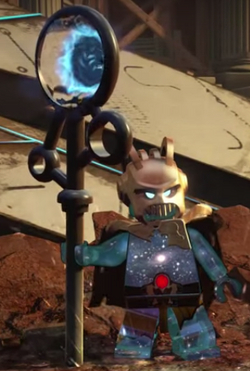 Around the time the Multiverse was created

Blue
Lord Vortech (Voiced by Gary Oldman) is the leader of the Villain Army and the main antagonist of the Lego Crossover.

After the creation of the multiverse, Lord Vortech was created. He went on a quest to find the Foundation Elements and created the Dark Demon to keep God busy at the time. He soon found Foundation Prime and created his lair. He planned to create an army of villains across the multiverse.

Lord Vortech used his Staff of Dimensions to bring all the Lego villains to Foundation Prime and he formed the Villain Army. X-PO learned about this and he formed the Hero Alliance by doing the same thing Vortech did earlier. The heroes attacked Vortech's Lair, but were eventually cornered. Lord Vortech ordered the villains to capture the heroes, but X-PO managed to open a portal for them and take them back to Vorton. Menwhille, Vortech invited more villains such as Darth Vader, Scorm and Mallock the Malligin to his army. The heroes invaded Foundation Prime once more. Lord Vortech summoned Thanos, Joker and Loki to finish them off. Thanos was the only one who managed to defeat the heroes, but even he was unable to stop Lloyd as he regained his Golden Powers. Lavertus gave Lloyd an orb of Golden Chi, inecrasing his powers even more. Lord Vortech, however, remained unaffected by the power and was able to take Lloyd down. When the heroes left, Vortech asked Chen, where the Nindroids could be. Immedetly after, the Nindroids came next to Vortech's throne. During the final battle, Vortech created a large, massive portal, which sucked in everything in it's way. Lloyd Garmadon attacked Vortech, continously blasting him with Golden Energy, terribly deformind Vortech's body. Lloyd then absorbed the power of the portal, causing Vortech to be swallowed by the portal, but he grabbed Lloyd and they were both sucked into nothingness. It's unknown what happened to Vortech afterwards. 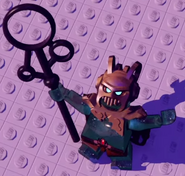 One of the early degsins for Lord Vortech, as seen in a trailer.

Serveral concept arts for Lord Vortech (The last one is the final).

Lord Vortech on his throne
Add a photo to this gallery
Retrieved from "https://legocrossover.fandom.com/wiki/Lord_Vortech?oldid=1561"
Community content is available under CC-BY-SA unless otherwise noted.