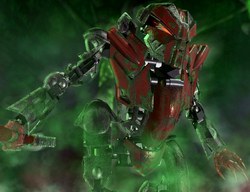 Red
Makuta Teridax or just simply Terdiax (Voiced by Lee Tockar) is the overeaching antagonist of the Bionicle franchise and a leading member of the Villain Army.

Teridax was teleported to Foundation Prime, with other main villains by Lord Vortech and they formed the Villain Army. Teridax fought in a battle erupted when some heroes arrived. The villains managed to defeat and corner the heroes but before they could finish them off, however, X-PO opened a portal back to vorton, saving the heroes, much to Teridax and his fellow villains' dismay. Teridax was present when Mallock the Malgin come through a portal to help them.

Add a photo to this gallery
Retrieved from "https://legocrossover.fandom.com/wiki/Makuta_Teridax?oldid=1648"
Community content is available under CC-BY-SA unless otherwise noted.