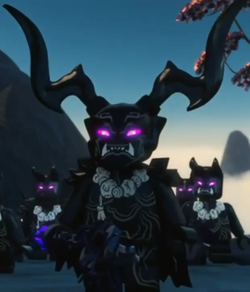 Unknown (Presumably the Realm of Oni and Dragons)

The Omega (voiced by Zach LeBlanc) is the Oni leader and wields a Staff. He seeks to erase creation and cover the realms with darkness.

The Omega was summoned by Lord Vortech and become one of the leaders of the Villain Army.

Omega is an unlockable character in the Lego Crossover Videogame. He wields his staff as a weapon.

Drone (Omega can summon other Oni to defeat enemies)

Retrieved from "https://legocrossover.fandom.com/wiki/Omega?oldid=1510"
Community content is available under CC-BY-SA unless otherwise noted.