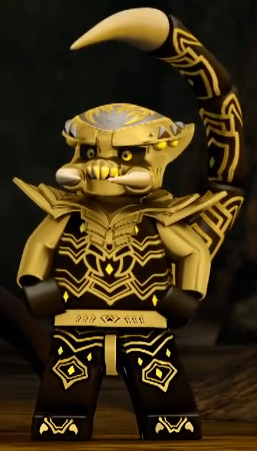 Gold
Scorm (Voiced by Jessie Inocalla) is the Scorpion King and the leader of the Crawlers. He will be the main antagonist of Season 3: Rise of the Monsters, along with Lord Vampyre.

At some point, Scorm was requited by Lord Vortech. He helped Vortech in his plan to defeat the Hero Alliance.

After Vortech's defeat, Scorm and Lord Vampyre united the Crawlers and the Monster Army into one team.

Not much is known about Scorm's role in Season 3 yet, except that he will be one of the main antagonists. At some point, Scorm requits the Fly Monster from Lego Minifigures to the team. At one point, he and Lord Vampyre, ecounter Iron Man, who calls Scorm "Mr. Gold".

Add a photo to this gallery
Retrieved from "https://legocrossover.fandom.com/wiki/Scorm?oldid=1656"
Community content is available under CC-BY-SA unless otherwise noted.