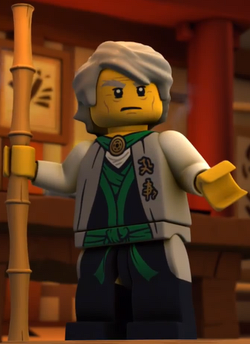 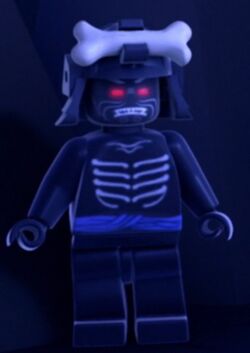 Garmadon was born to the First Spinjitzu Master and his wife. He eventually had a brother Wu. Some years after, Garmadon went to a fishing trip with his father and brother. The First Spinjitzu Master taught his sons in the ways of life and Spinjitzu. Sometime in the 1960s, Wu and Garmadon were training in their father's monastery. Garmadon dropped Wu's katana out the Monastery and he went after it. However, he was bitten by a strange snake and from that day, evil begin to grow in Garmadon. It took some time, however and when he was a teneeger, Garmadon went to train under Master Chen and he beated another student, Clouse, in training, gaining the title: Lord Garmadon. However, Chen discovered a love letter written by Wu to Misako and he forced Garmadon to revrite it. Sometime later the Serpentine War broke out. Garmadon and Wu both fought in the war, along with the Elemental Masters. But Chen turned the Master of Earth aganist them. Garmadon was the one to discower the key to win the war: The Scared Flutes. The elemental Masters used the flutes to defeat the Serpentine but two Masters called Acronix and Krux betrayed the others. They were too strong even for Wu and Garmadon and Wu ordered Ray and Maya to forge the Time Blades from Chronosteel. Wu and Garmadon used the Blades to absorb the Time Twins' powers, then they threw them into a vortex. The Time Twins went after them. Years later, Garmadon and Misako married and had a son named Lloyd. Immedately after, the First Spinjitzu Master died and Garmason was fully corrupted by evil. He lost a duel with Wu and fell to the Underworld.

In the Ninjago Series

Garmadon began to rule the Underworld, when Wu and his Ninja team arrived. After Samukai was destroyed by the power of the Golden Weapons, Garmadon left the Underworld in a portal and arrived in the Realm of Madness where he grew two more arms. Wu found him and they went back to Ninjago to save Garmadon's son LLoyd, who become the Green Ninja. Garmadon betrayed the Ninja and allied with the Overlord and his Stone Army, to defeat Wu and Lloyd. But the Overlord betrayed Garmadon and took over his body. During the Final Battle, Lloyd become the Golden Ninja and defeated the Overlord, thus Garmadon was freed from corruption. Months later, Garmadon sacrificed himself to save Ninjago from Master Chen, by banishing himself to the Cursed Realm. He was killed when the Cursed Realm was destroyed. However, Harumi and the Sons of Garmadon resurrected his evil form.

Garmadon was teleported along with the Ninja and his brother Wu to Vorton by X-PO. However, Garmadon didin't go to Foundation Prime to fight Lord Vortech. He was present when Fluminox and other heroes arrived to help them.

Garmadon is an unlockable character in The Lego Crosdover Videogame.

Spinjitzu: Garmadon can perform Spinjitzu to defeat enemies. His Spinjitzu is a purple color.

Destruction: Garmadon can blow up pieces with a blast from his hands (lord form only) or his staff. In his lord form, he can disable enemies to pieces.

Acrobat: Garmadon can use his staff to jump.

Transformation: Garmadon can transform into his lord form.

Season 3: Rise of the Monsters 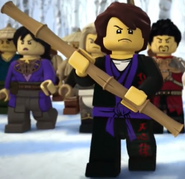 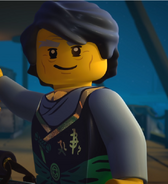 Add a photo to this gallery
Retrieved from "https://legocrossover.fandom.com/wiki/Sensei_Garmadon?oldid=1661"
Community content is available under CC-BY-SA unless otherwise noted.