The Avengers are brought face to face with the cunning, intelligent, and fierce warlord, Thanos (Voiced by Issac C. Singleton Jr.), a ruthless cosmic threat consumed with saving the universe from itself. To stop him, the Avengers must join forces with the Guardians of the Galaxy, Doctor Strange, and Spider-Man to bring down this villain who will stop at nothing to collect the six Infinity Stones. 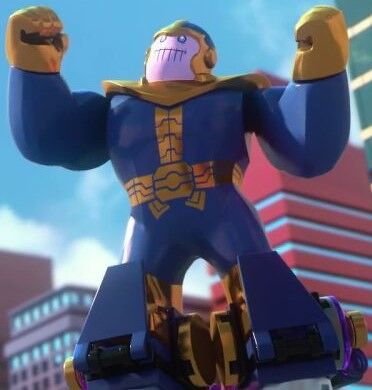 Thanos was born on Titan, which became overpopulated and its resources finite. Thanos offered the solution of genocide on half of the population at random and was labeled a madman and the population eventually starved and died out with Thanos being the last of them. Thanos would then recruit an army of enforcers of his ideology naming them the Black Order. He would then go to different planets and kill half the population. On one planet he went to he met a young girl named Gamora and he took her in and trained her to be his most trusted assassin. Thanos ultimately had one goal to find all 6 of the Infinity Stones and with the snap of his fingers decimate half of the entire universes population. He came into possession of the Mind Stone as a Scepter but he lost it when he gave it to Loki and he failed his mission to bring him the Tesseract which had the Space Stone. Thanos then hired a Kree called Ronan to get the Power Stone for him but Ronan took it for himself but was killed so now Thanos had to go retrieve the stones himself. First he went to the dwarves and forced them to build a Gauntlet to contain the stones then he went to Xandar to get the Power Stone. After this he invaded the asgardian ship and killed almost everyone aboard and got the Space Stone he then sent two minions to get the mind and time stone on earth while he went to the spaceport Knowhere to find the Reality Stone where he found Gamora who had desserted him years earlier knowing she knew where the Soul Stone was and ended up sacrificing her to get the Soul Stone. He then went to Titan where he battled some avengers but eventually got the Time Stone when Dr. Strange bargained to give it in exchange for Tony Stark ’s life. Thanos then teleported to Earth to get the mindstone from vision where he took the Mind Stone from Vision and killed half of the universe with the snap after this he hid but the remaining avengers found and killed him however in an effort to reverse what Thanos had done they travelled back in time and a past Thanos knew what they were doing and followed them to the future to stop them but he failed and was killed when Stark used the stones to snap him and his army away.

Thanos was summoned by Lord Vortech, as reinforcements for the villains. When the heroes escaped, Thanos and the other villains were realy pissed off. Tnanos was present when Mallock the Malgin arrived. When the heroes arrived once more, Thanos fought Lloyd, but the latter regained his Golden Power and defeated Thanos. 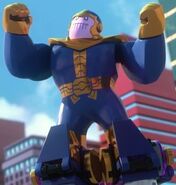 Add a photo to this gallery
Retrieved from "https://legocrossover.fandom.com/wiki/Thanos?oldid=1543"
Community content is available under CC-BY-SA unless otherwise noted.