The First Spinjitzu Master (Voiced by Jim Conrad) is the creator of Ninjago. He is an important character in the Lego Crossover series. 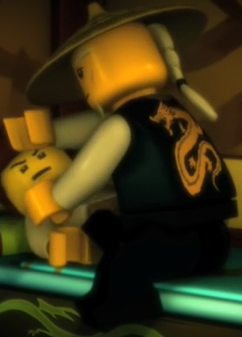 The First Spinjitzu Master was born to Firstbourne and Omega as a being with both the powers of Creation and Destruction. When Firstbourne and Omega fought over which side the FSM should choose, he left the realm and created Ninjago. However, the Oni went after him and placed the Oni Mask of Hatred in an Oni Temple they built. The other two Oni Masks were lost in parts of Ninjago and altough the FSM did managed to locate them, he didin't move them to anywhere else, as he feared the Oni would sense it. The Oni, however did not gave up, they created an evil mirror image of the FSM, The Overlord and sent him after the FSM. However, The Overlord, even with the help of the Stone Army, couldn't defeat the FSM and was banished to the Dark Island, while the Stone Army were imprisoned in underground tombs. The FSM continued to create Ninjago and he eventually met a woman. They married and she gave birth to Wu and Garmadon. At some point in time, the FSM agreed with Mambo the Fifth, that humans and Serpentine shall live in peace. When Wu and Garmadon become older, the FSM went on a fishing trip with them. Later, while training, Garmadon hit Wu's katana so hard, it flied outside the Monastery. Garmadon went outside to find it, only to be bitten by a small snake called The Great Devourer. The FSM found Garmadon and tried to heal him, but failled. He told Wu that it wasTthe Great Devourer what bit Garmadon, and it's slowly corrupting him. Years later, the FSM took part in the Serpentine War and the War For All Time. Years after, the FSM felt his time was coming. He was able to saw Lloyd's birth but died immedetly after. He was still able to contact and guide Wu, Garmadon and even Lloyd in the future as his spirit was still out there somwhere.

Since we never got an offical FSM figure, here is how you can build a custom:

Beard: Not realy nesesarry, but you can use Gandalf's beard from The Lord of the Rings sets.

Legs: The legs given for the body.

You can also use a Golden ZX Ninja armour for his battle suit (Appearing on figures such as Golden Lloyd). You must use a deepstone Wu armor for that.

Add a photo to this gallery
Retrieved from "https://legocrossover.fandom.com/wiki/The_First_Spinjitzu_Master?oldid=1658"
Community content is available under CC-BY-SA unless otherwise noted.